The Sermon opens with some beautifully shot images of the English countryside haunting, magical and pictureseque they set the scene perfectly. These are followed  by an opening credit sequence that recalls the heyday of Hammer and Amicus films, a lone crow flies into shot and lands in a lonesome tree. A close up of the crow sits behind the films titles, in homage to Piers Haggard’s folk horror classic The Blood on Satan’s Claw. Already this feels like familiar territory.

The story concerns the events of a small rural village somewhere in England. We are presented with images of a young woman and her father, the local preacher preparing for the sermon of the title. She is filling a glass decanter with wine, whilst the father shaves in preparation of the coming events. 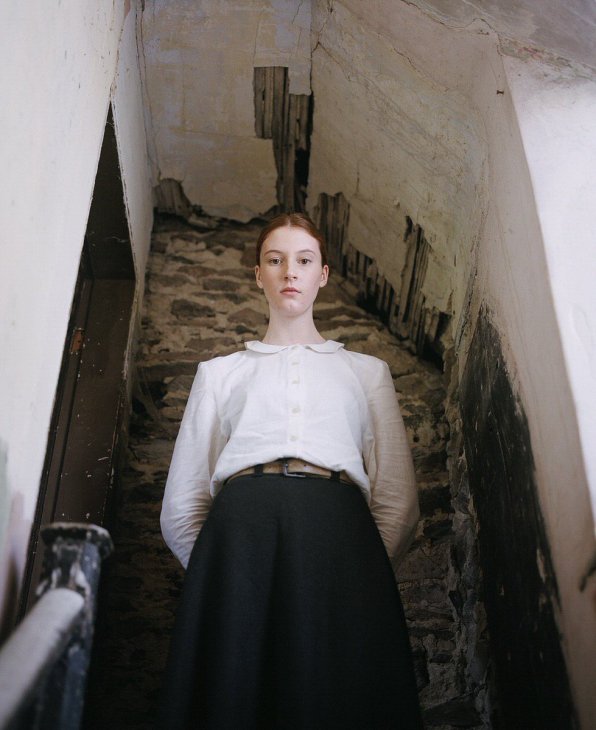 The vast majority of the film’s eleven minutes takes places in the church hall, as the preacher well spoken and charismatic takes centre stage. The sermon itself is unsettlingly homophobic in nature and makes for incredibly uncomfortable viewing. What it does is, it sheds a little light on the attitudes of the community, its people and its prejudices. The preacher’s hateful attack on homosexuality is strikingly outmoded to us in today’s world, and yet the congregation is supprtive of his principles. It highlights perfectly for me the positive changes that we as a people have undergone over the last 50 or 60 years in our attitudes to sexuality. I am reminded somewhat of The Wicker Man, in that we are presented with a rural community isolated not only geographically but also from modern liberal thought. One imagines how Sgt Howie must have felt upon finding out that certain archaic practices were still being practiced many years after popular belief in them had faded away.

The final twist in the tail is a satisying turn, it is harsh and unpleasant in its execution, however it makes for a great ending. The film is not yet out on general release so I am unable to discuss the storyline any further at present, other than to say it is an excellent film and well worth checking out if you get the chance.

Overall, The Sermon is a very well made, beautifully scripted short film. The music by Benjamin Hudson and Cape Khoboi fits perfectly,  and it features some genuinely lovely cinematography, that really captures the essence of the English countryside. I am not entirely sure if it was intentional, but several external shots were taken from a low angle. This was very reminiscent of Dick Bush’s amazing cinematography for Blood on Satan’s Claw, where it was used to great effect to hint at how everything rises up from the earth. This may or may not be the case, however I felt compelled to raise it in passing.

Director Dean Puckett cut his teeth making documentary films, the most recent of which was released in 2013, Grasp the Nettle highlights the exploits of a group of land rights activists who battle to set up alternative communities in Britain. The Sermon is his second fiction short to have been supported by Creative England and the BFI after the comedy, horror, sci-fi short Circles in 2015. Circles, which was also set in Devon involved paranormal investigators taking their revenge on a group of crop circle hoaxers. I will certainly be looking forward to seeing more from Dean on the evidence of The Sermon.

The Sermon will receive its premiere at the BFI Flare London LGBTQ+ Film Festival this coming weekend, Saturday March 24th. I have included more information for those interested in checking out this excellent folk horror gem.