Wick – The protector of a Witch is just as bad as a Witch.

In August I had the tremendous honour of being invited to the wonderful Genesis cinema in Whitechapel for a private screening of the new Folk Horror short film `The Wick’. Written, produced by and starring the clearly very talented Michelle Coverley FHR caught up with her to discuss the film, how it has been received and what the future holds for her and The Wick.

Set in the early 19th century in rural England, ‘The Wick’ is a tale of deceit and persecution of a woman who fights for justice against a lawless witch hunter.

The story unfolds seventy-three years after witch trials were banned in the U.K. When Esther, a known herbal healer in a small close knit community, witnesses her friends murder at the hands of a lawless witch hunter, she finds herself entangled in a dangerous web of deceit, blind ignorance and superstition. We track Esther’s head on collision into this dark world and her realization that things clearly need to change. We follow her journey of attempting to put an end to the ignorance and barbarity of these outdated beliefs. This is a universal and timely story of a strong woman, striving for justice and fighting for the rights of the underrepresented and the misunderstood.

`THE WICK’ is a dark, period drama with the village that Esther, our female protagonist lives in, being extremely superstitious to the point that it is horrifying. What these villagers are led to believe, without much proof and the lengths that some of them go to, to ‘fix’ things is quite shocking. The deception and ignorance is quite barbaric, with folklore and religion being at the heart of it.

To this day, countless numbers of people are still being accused of witchcraft and persecuted around the world. They have no rights, no voice and are condemned by misguided beliefs 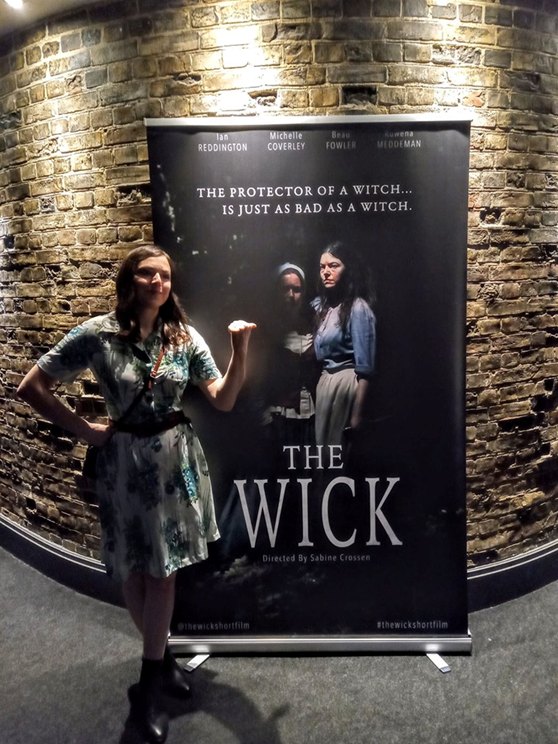 Folk Horror Revival: The Wick is a beautifully shot film with the landscape and nature very firmly embedded into the story telling adding to the sense of isolation that allows suspicion and paranoia to breed in the community. It has definite Folk Horror overtones not least in its subject matter – how do you feel now it is done and being presented as a finished piece? I guess really you are still working on it in a publicist capacity now.

Michelle Coverley: Thank you for such a great review. I’m so happy that people are picking up all those details from the film. That’s exactly what I wanted people to see in ‘The Wick’. I feel amazing now that it’s complete and that it’s setting off on its festival circuit. It was such a long journey to this point. Many ups and downs and so to finally have it finished is a big relief. Both, the director, Sabine Crossen and I are extremely proud of it.

FHR: You must be very pleased with the end result and how it has all come together – can you tell us a bit about some of those different components (location, music, costume, set dressing)

MC: I’m extremely pleased with what my team and I have accomplished. Everything was shot on location in Sussex and we were very lucky to have found those specific places. Thanks to the Weald and Downland museum, The national Trust and Sussex Wildlife Trust, we were able to achieve a very authentic look for ‘The Wick’. Our amazing costume designer, Emma Clark added to that by designing and singlehandedly making all our costumes from scratch. Without her dedication and sheer hard graft, we never would have done it. As well with our talented production designer, Karijn Nijmeijer, who transformed these amazing locations with her magic touch. She traveled all the way from Holland to be with us!

Apart from those visual aspects, the director and I felt it was important to give the film a modern feel, to accentuate the films topical themes so to help the audience observe and connect from a more contemporary point of view. We did this through working with the amazingly talented Micha Theofanopoulou & Hollie Buhagiar on the sound design & music and then with Pooya from Panchroma Studios on the colour grade, choosing vibrant colours and stark contrast.

FHR: I really loved `The Wick’ and I know it got a big round of applause at the private screening I attended. How has it been received? It must be interesting to see how different people respond to the story and its message.

MC: We got an amazing response from all our guests at the private screening. Sabine, the director and I were pretty blown away with it all. Because we have been so close to it for the past year, and I for even longer, it was so amazing to hear the audience notice all the small nuances of the subject matter come though, as well as picking up the bigger picture of the societal corruption and female persecution and to realise that it still has relevance today. I had people coming up to me telling me it really affected them, that it was hard hitting, surprising and shocking but beautiful at the same time.

People wanted to see more which was fantastic to hear! They were also pretty

surprised of the style of music and sound design we chose as it was quite obscure and different to what a ‘classical’ period drama would have used. The director and I were intent on steering clear of making it look and sound like a classic period drama. It’s turned into a period thriller with a modern edge, which I love.

FHR What are you plans for the film now? Will people be able to see it at some point? (is there a feature length version in the pipeline maybe??)

MC: Yes, I would love to make ‘The Wick’ into a full-length feature film, which is the plan. I’m at this minute adapting a treatment I did for it some months ago with a friend who’s in the industry. Watch this space!

For ‘The Wick’ short film, it’s now in the film festival circuit stage. I can’t wait to share with you when it has its world premiere. Short films usually have a two year life span at festivals till you launch it on line or it gets taken up by a distributor. The point of this is to make contacts for future projects and to showcase everyone’s talent who worked on it. I feel indebted to all the amazing people who came on-board. So trying to get it into as many great film festivals as possible is what I’m aiming for. This stage is a whole other ball game. Since finishing post-production, I’ve been scouring the internet late into the night, submitting it into festivals all over the world. Fingers crossed, they start to bite.

FHR: And what about you – what are your plans? Any future projects you can share with folk yet??

MC: After the experience with writing and producing ‘The Wick’, I’m actually pretty interested in directing my next piece. I’ve been collecting images over this past year that inspire an idea I’ve had for a while. It’s still pretty raw and the framework is all over the place but it’s a psychological thriller piece with folk horror and magic realism at its core. I’m also very excited about putting my actor’s hat on again for other people’s projects. That was the whole point in fact with making ‘The Wick’, to showcase my acting. So I can’t wait to throw myself into that again.

If you get the chance to catch The Wick at one of the many film festivals that will no doubt be clamouring to showcase Michelle’s wonderful creation then you are in for a real treat. The landscape and presence of nature is wonderfully represented throughout giving the film a reassuringly bucolic feel that balances perfectly with the dark story that gradually unfolds. At times I was reminded of the way the landscape was shot in Winstanley and Witchfinder General in which small isolated incidents of great importance are played out within the vast expanse of the English countryside. Alongside this is a fantastically atmospheric score, a deep sense of authenticity and attention to detail and a perfectly paced story…in short The Wick is a triumph and hopefully it’s just the start for Michelle.