I imagine that a fair percentage of you are, like me, a fan of the local guide to an area’s myths, legends and hauntings – the sort of slim publication you can pick up in the Tourist Information Centre, library or small local museum shop. Sometimes you can pick up a second hand copy which approaches the subject matter from a slightly different angle to a modern version and of these it is those from the late 60’s-70’s that are the most pleasing. There is something about this period that sets it aside as a high tide mark for all things folkloric, esoteric, occult and otherworldly and this is reflected in these wonderful little guide books. Written by people with local knowledge (“for local people – we’ll have no trouble here”) and a willingness to believe in the stories they heard as they were growing up, they present the most farfetched and dark tales with a non-judgmental innocence punctuated with groovy artwork, long lost fonts and, if you are lucky, a handful of adverts for local attractions and tradespeople.

Recently there has been a resurgence of self-published magazines which take a look at the same subject matters but do so in a studious, serious style for the already converted and while they are a refreshing sign of people’s changing tastes and the rise of folk horror and other dark topics in the public’s conscious they don’t have quite the charm of those small run local guides of yesteryear. Their production and the quality of the end product is very impressive indeed and makes for a thing of beauty but they look more like the coffee table read of Jerry and Margo than the 70’s charm of Tom and Barbara’s rustic kitchen table…..for that you need to visit Scaraby and pick up a copy of The Occultaria of Albion.

This charming, oddball publication is the brainchild of writer Richard Daniels and illustrator Melody Clark in which `the damned and dusty files of (the hidden, haunted Lincolnshire village) Low Scaraby are opened, releasing a howl of unsolved mysteries and oddities.’ The perfect size, length and subject matter to enjoy with your afternoon cuppa on an autumnal day.

Lower Scaraby was introduced us to in Richard’s wonderful short story collection Too Dead For Dreaming (previously reviewed by FHR) and each edition of The Occultaria of Albion focuses on a different aspect of the Folk Horror landscape and legends of the countryside around the village. We are treated to tales of a tiny model village with its own inhabitants and urban myths in the Isle of Drumgunnan issue, the portentous psychedelic summer gatherings at Wickstead House, Highway robbery and UFOs on the A2358 and all manner of other wyrd folk horror wonderfulness with hopefully plenty more still to come. 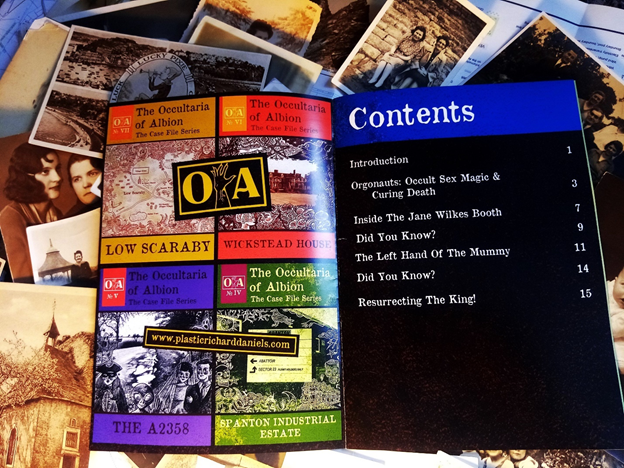 You can get your back issues and keep an eye on future releases on Richard’s Plastic Brain website:

Come; step through the fog and the velvet drapes and into an Albion which has always existed, though only ever glimpsed in the shadows. If you become an OCCULTARIA of ALBION KNIGHT (OAK) means you are part of an exclusive group of men and women – yes, in centuries past you would have been burnt as a heretic but today, you are a seeker of truth!

Note: the OA Trauma Helpline has now been disconnected. You’re on your own.