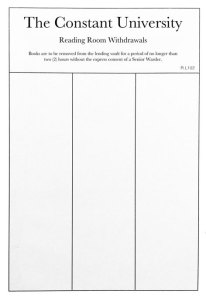 Daniel Pietersen is an author of weird fiction and horror philosophy who has spent the past few years poring over the vast and only-recently unearthed archival material from the so-called Constant University. This vast selection of prose fragments, poetry, anthropological material and photographic media of various types and qualities outlines the lives and customs of the inhabitants of the city of Benedictine, a curiously formless conurbation consisting of five Quarters and surrounded on all sides by the dangerous wildlands of The Fen.

As these scraps are analysed and put into some kind of order, a world as rich and complex as our own comes into being.

Further information on the archive can be found at its aetherycal repository. Daniel Pietersen has an online presence here.

The foundations of the city are riddled with holes. Basements, sewers, sub-basements, forgotten wells and more upon more. Even the eerily still worlds of natural cave systems stretch down for untold fathoms beneath the daylight world. Very few people venture down into these dark, fungus-haunted spaces. Fewer still return.

And, in the centre, the great campanile rises high above the clouds of salesman’s patter as if unconcerned by the price of silken gloves or sesame. An ersatz gnomon – although built long after the square was named for a now-forgotten bureaucrat, giving it a perhaps not entirely subconscious homophone – whose even-paced shadow strolls from dawn to dusk, a dark-suited overseer marking out ungraded time against lamp-post and flagpole.

There lies, far East, a nameless fen/didst Man last tread I know not when/but beasts there are/and worse by far/things that yearn for foreign stars/things as shy from mortal ken/but dance and howl on the nameless fen…