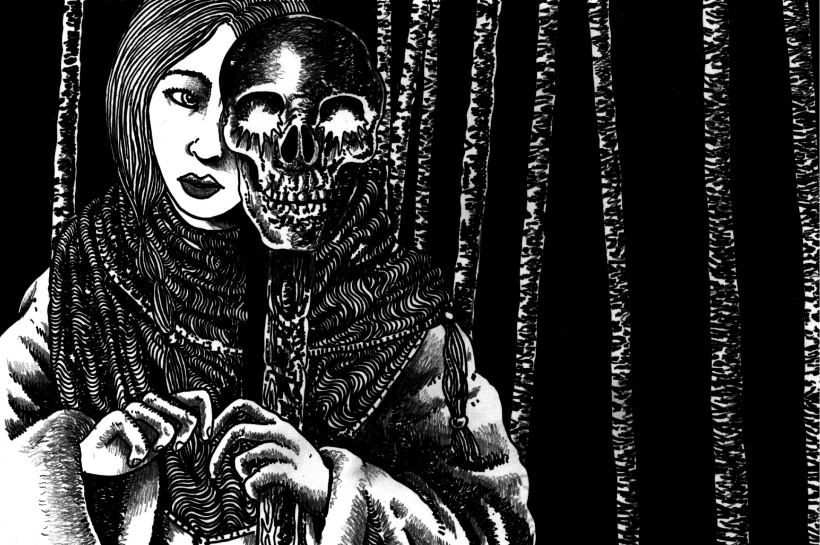 One of the most popular characters of Russian folk characters is a heroine named Vasilisa (or Vasilissa) who appears in several Russian fairy tales collected by the folklorist Alexander Afanasyev. Known variously as Vasilisa the Wise, Vasilisa the Brave and Vasilisa the Beautiful, her virtues are held in esteem.
In a trope familiar to fairytales the world over, Vasilisa’s mother died whilst Vasilisa was still a child and her father remarries another woman who proves to be an unkindly stepmother to her. Furthermore her stepsisters were none too kindly either. When her father had reason to travel away for a while, the family moved into a cabin deep within a huge forest.
Vasilisa was given a heavy workload of chores by her new family, but she had in her possession a magic doll that was her mother’s final gift to her and which assisted her with her work. Also the stepmother would send Vasilisa out into the forest to collect sticks or mushrooms, but really in the hope that the girl would become fatally lost.
Whilst living in that remote cabin within the woods, the girls were instructed always to have a single candle kept alight from which other fires could be lit. It so happened one day that one of the elder stepsisters let the candle go out, so the young Vasilisa was ordered to gather fire from their nearest neighbour, who was none other than the witch Baba Yaga. So Vasilisa made the considerable trek beneath the darkness of trees to the macabre chicken-legged hut of Baba Yaga. On the way she is passed in turn by three horsemen. Each of which is clad in a single colour which also corresponds to their mount; first a white rider, then a red then finally a black rider whom nightfall followed soon after. Reaching the abode of the old witch, Vasilisa is petrified by the skulls on the fenceposts, whose eye-sockets burn with an eerie glow. Upon finding the girl, Baba Yaga instructs her that in order to retrieve fire Vasilisa must undertake certain tasks.
However should she fail in these chores or attempt to leave without performing them, then she was informed that she would be cooked and eaten.
The duties allocated to her were to clean Baba Yaga’s hut, to separate bad kernels of grain from the good and to separate poppy seeds from soil. Baba Yaga left the girl to her business but Vasilisa was distraught and already exhausted from her long walk through the woods. However the magic doll again assisted her in her tasks and the girl slept.
In the morning, Vasilisa looked out and saw the white rider pass by, later on the red rider passed and finally the black rider, followed both by darkness and the return of Baba Yaga. Seeing the chores beset Vasilisa completed, the witch proceeded to invoke several pairs of invisible hands to wring juice from the separated grains. She asked Vasilisa if she had any questions. The girl enquired about the horsemen and was informed that the white rider was the break of dawn, the red rider was the midday sun and the black one was the fall of night. Vasilisa was then about to enquire about the disembodied hands that worked for the old woman, but sensing this the magic doll in her apron pocket shook as if to warn her to hold her tongue. Vasilisa understood this and asked not of the mysterious hands.
Instead Baba Yaga asked How Vasilisa had managed to complete the difficult chores she had beset her. Vasilisa replied not too revealingly but not untruthfully that she had managed through her mother’s blessing.
The old witch wanted to hear of no blessing in her abode so cast Vasilisa out into the dark, but did not renege her promise and gave the girl a skull upon a stick. The fire in the dead eyes would both illuminate her path home and relight the fires within the cabin.
Upon returning there however, her stepmother and stepsisters became transfixed by the smoldering eyes of the skull and were reduced to nought but ashes. Vasilisa buried the skull.
Different tales follow the further life of Vasilisa, in one she is seen to weave threads of flax into gold or the finest silk. So impressed is the Tsar himself upon seeing the cloth, that he bids Vasilisa to meet him. Upon seeing her he is smitten with her beauty and takes her for his wife. In another variation Vasilisa is named as the girl whose kiss transformed a frog into a prince, who was then to become her husband. Whatever the tale of Vasilisa’s later life, there seems to be a common agreement that she and her father spent it in greater wealth and happiness than before.

From the book Black Earth: A Field Guide to the Slavic Otherworld. Written and Illustrated by Andy Paciorek 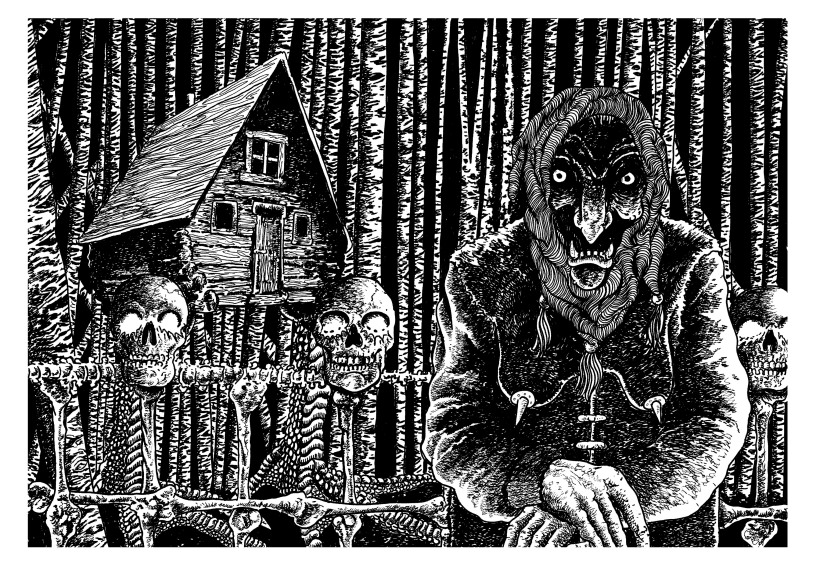