Welcome to this the third in our series of interviews conducted by our very own man about town, John Pilgrim.  Harpist Sarah Dean is someone I was only vaguely aware of until recently, So for me this interview is going to prove very interesting from a personal perspective. Anyway I will shut up and leave the rest to John and Sarah.

John Pilgrim: What first attracted you to the harp?

Sarah Dean: My awareness of all things harp began with listening to The Celtic Renaissance album by Alan Stivell and then hearing Jon Anderson playing it. I’m drawn to things that create atmospheres and that’s what I love about the harp.

John Pilgrim: How has your understanding of the Celtic harp and its associated traditions developed over the years?

Sarah Dean: Bizarrely enough a guest spot with my local Women’s Institute on ‘Being a Harper’ sparked off lots of research and I put all this on my webpage entitled ‘All Things Harp’. I found out lots of things about the harp that I didn’t know, the origins of it, how physically it’s developed over the centuries and all the mystique surrounding it…fascinating stuff, thank you Ladies of the WI!

John Pilgrim: You seem to have strong affinity for the music of the 1970s. This is the classic era for Folk Horror film, television and literature.  What bands do you particularly like from around this time? And would you agree that the 70s are returning in some ways?

Sarah Dean: I’m stuck in the 70’s to be honest! As to returning, I don’t think it’s ever really gone away…music comes and goes and people are influenced by all sorts of things and all the things you grow up with and listen to. It all fashions the music we make, either consciously or subconsciously.  I was very lucky to have an older brother and sister who let me rifle their record collections when they went out, so Pink Floyd, Yes, Wishbone Ash, Gryphon, Led Zeppelin and actually too many to name are all their whirling round from a very early age…as well as The Osmonds and Suzie Quatro, what a mix. Then of course Punk happened.

John PIlgrim: The countryside is clearly important to you. What role does it play in relation to your music, songwriting and general outlook on life?

Sarah Dean: I moved out of York in 1997 and actually just needed the fields and trees around me all the time…birdsong especially.  I’m drawn to nature and the constant changing of the seasons is always a fascination to me.  Being outdoors for me frees the mind and nurtures the soul and I think I have written about this quite a lot.  We write about things we know generally, don’t we? So writing a song about cloud watching or running down a hill with my dog seems a good a topic as any!

John Pilgrim: Are you interested in the new nature writing – if so, which writers particularly appeal to you?

Sarah Dean: I am an avid reader of all things nature wise: Roger Deakin, John Lewis-Stempel, J.A Baker, Thomas Pakenham, Robert MacFarlane. I hoover up books like these – glorious writing!  Nan Shepherd, Christopher Somerville.  I’ve just finished Peter Wohllebens’ The Hidden Life of Trees. Books that you can come back to and dip in again. It’s great that there’s so many new writers too, if we can get people reading and appreciating the countryside and nature then hopefully we can look after it better!

John Pilgrim: I understand that your creative talents have extended to other outlets such as music for meditation, poetry and animated vikings. Can you tell us more?

Sarah Dean: I’ve recorded a lot of music for meditation and actually the harp is just fabulous for this.  Again, creating atmospheres and soundscapes that can take you to other places.  We live in a world of constant mind traffic and the need for mindfulness and meditation is key to mental health.  I’ve been asked to do various projects to put poetry to music, our dear friend Don Walls was someone who I collaborated with doing joint concerts, song and poem swapping.

John Pilgrim: Your performances often include a little bit of humour and you clearly enjoy the engagement you have with audiences…

Sarah Dean: I must admit that given the chance I’d probably like to do a bit of stand up comedy. It’s true I do love to have a bit of banter with the audience, I’m very much of the opinion that this time with the audience is a one-off event and it’s about communication, not just through song but the whole rapport that you can build up.  It’s probably a reaction against seeing Van Morrison in concert and I seriously don’t think he said a single word to the audience.

Performing and sharing the music and songs with an audience and having an interaction is really important to me, but it depends where you are, so each concert is different in that respect.  Working in bands is always fun, because you never know what could or might happen.  In the last couple of years I’ve been on the road with The Heather Findlay Band and whenever she’s trying to tune the guitar I slip into a bit of Tubular Bells just to fill the time…having Spinal Tap moments like when my a cappella trio Soundsphere played at The Sage in a choir festival and we couldn’t find the stage and ended up getting very lost.  Being asked to play the theme from Blackadder for a wedding, yes it’s possible.  I’m working on a harp version of Popcorn as we speak…no, I really am!

John Pilgrim: The Black Swan in York is well known to you, but Swansongs will be your first Folk Horror Revival event. What are your expectations of the night?

Sarah Dean: I’ve got a feeling that we’ll be making some musical magic at the Swansongs gig and I’m looking forward to meeting all the musicians and hearing their music. The Black Swan holds lots of happy memories for me and the Wolfe Room is so atmospheric, the ambiance it creates will make for a really special night and I’m delighted to have the chance to play a part in it. 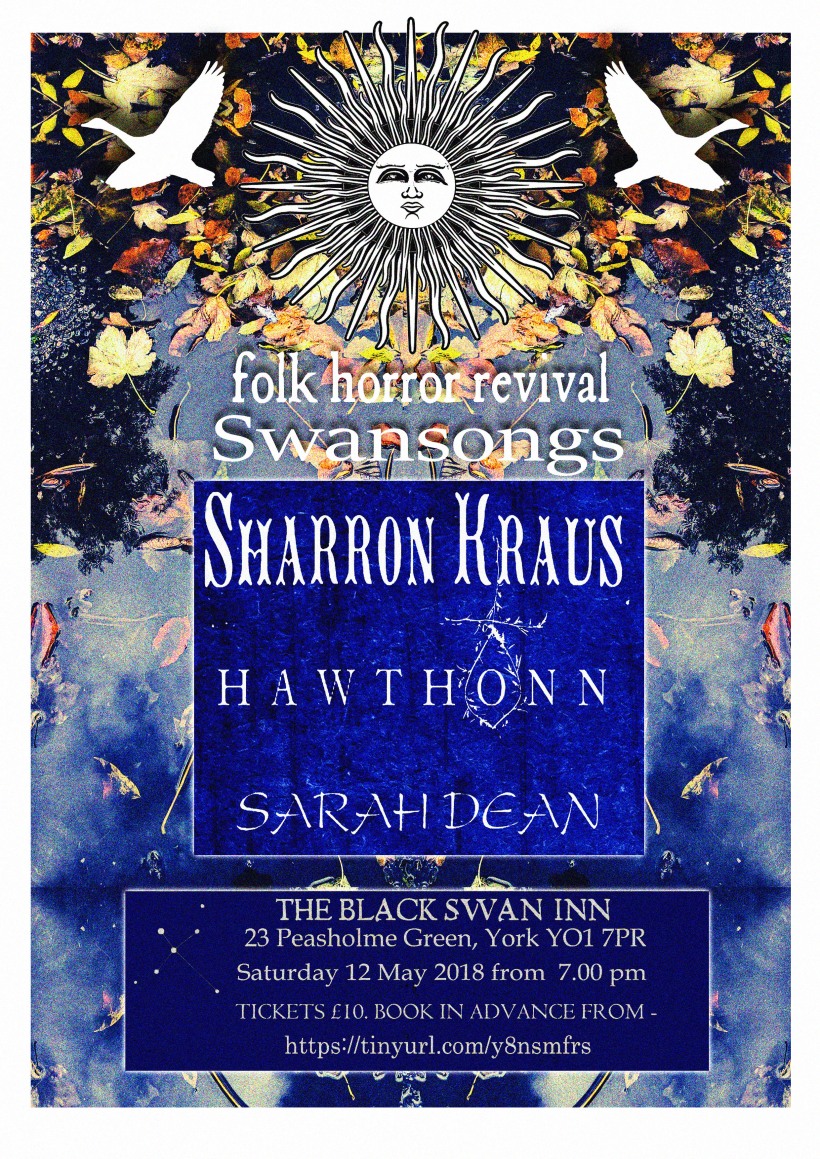 Swansongs takes place May 12th at the Black Swan in York. The last few remaining tickets are still available for this fabulous event from the following eventbrite link, but get in quick as numbers are very limited and we are getting close to selling out.

Sharron Kraus is a singer of folk songs, a songwriter and multi-instrumentalist whose solo work and collaborations offer a dark and subversive take on traditional music. As well as drawing on the folk traditions of England and Appalachia, her music is influenced by gothic literature, surrealism, myth and magick. Her songs tell intricate tales of rootless souls, dark secrets and earthly joys, the lyrics plucked as sonorously as her acoustic guitar.

She has released six solo albums, the first of which, ‘Beautiful Twisted’, was named by Rolling Stone in their Critics’ Top Albums of 2002. As well as her solo work, Sharron has recorded an album of traditional songs – ‘Leaves From Off The Tree’ – with Meg Baird and Helena Espvall of Espers, written an album of songs to celebrate the seasons of the year – ‘Right Wantonly A-Mumming’ – which was recorded with some of England’s finest traditional folk singers including Jon Boden, Fay Hield and Ian Giles – as well as recording and performing as a duo – Rusalnaia – with Ex Reverie’s Gillian Chadwick, with Tara Burke (Fursaxa) as Tau Emerald and with Irish free-folk collective United Bible Studies. 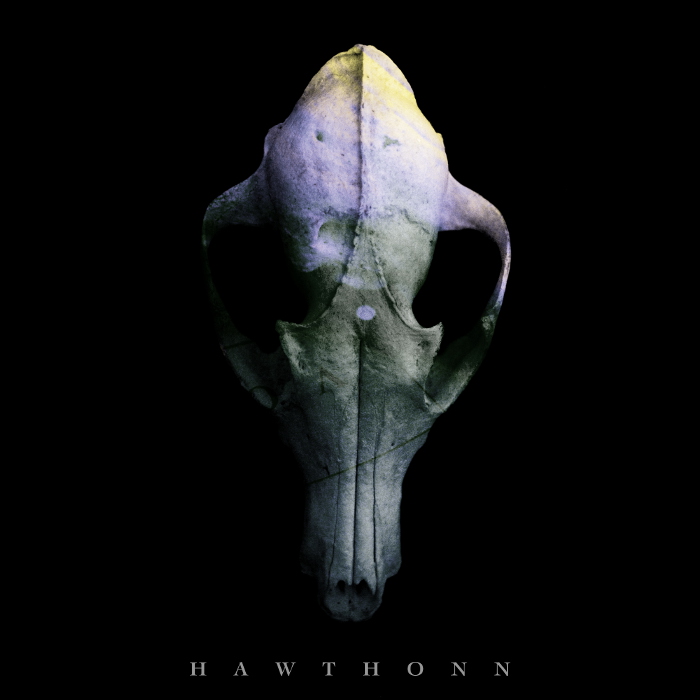 Sarah Dean aka The Incredible String Blonde, has been writing her own music and ‘noodling’ for years on various instruments, but only since 2007 has Sarah finally pulled all the years of performance as a singer and hours of practice together, to go solo and write and perform her own songs.
It is the Celtic Harp that allows Sarah to create rich textures and atmospheres to the words and meaning of a song, taking listeners to another place with its magical and mesmeric soundscapes.   Peppered amongst her own self-penned songs are some surprising contemporary covers (the bluesy Man In The Long Black Coat, Pink Floyds’ atmospheric Grantchester Meadows, Walking On The Moon by The Police etc) and beautifully arranged traditional folk songs.  20 years of performing have given Sarah a relaxed and easy stage presence and audiences are treated to amusing anecdotes.

Its traditional rooms all include en suite bathrooms and antique, 4-poster beds with rich draperies. Parking and breakfast are complimentary.

They boast a wood panelled restaurant with coffered ceilings and an open fireplace where we serve food daily, and two beer gardens where you can relax with a drink when the sun comes out.

There is a ghost of the gentleman in a bowler hat who appears to be impatiently waiting for someone at the bar – eventually his apparition slowly fades away.

Another ghost can be seen sitting staring into the fire in the bar. It is the ghost of a particularly beautiful young woman thought to be a jilted bride. It is said that should a man stare into her face he will die in ecstasy.

There are several other ghosts who appear regularly. A small boy, known affectionately to the staff as Matthew, is frequently seen in the bar and passageway. He is dressed in Victorian style clothes and is reportedly a pickpocket, which might explain the disappearance of various items kept behind the bar.

A rumoured highwayman, who we know as Jack, appears regularly in the kitchen, dressed in riding boots and a long black cloak. Interestingly, the kitchen was built over the original stable yard. He can also be heard singing along to Irish folk songs in the corner of the bar late at night.

A less frequent ghostly visitor is a large black cat wandering around the pub. This ghost causes confusion among staff and frequent customers alike as it bears a strong resemblance to Salem, the pubs resident feline.

The chair by the fire is reputedly cursed and it is said that should anyone sit in it a curse will fall upon them. We recommend standing.

There have been regular sightings of a pair of legs disappearing up the stairs leading to the landlord’s flat. We believe the landlord may have to be legless himself to dare to sleep there!

In the main bar area there is a clay pipe mounted on the wall. This pipe was found during restoration work. It is said that the workmen threw it out and at that very moment a chill descended upon them. There was a moment of frozen fear until one of them went to retrieve the pipe, after which the chill lifted. The pipe will always remain in the pub for fear of high electricity bills.

Tickets for Swansongs are available now £10 + small booking fee from –
https://www.eventbrite.co.uk/e/swansongs-tickets-44059576379
Event is likely to sell out so please book soon to avoid disappointment.